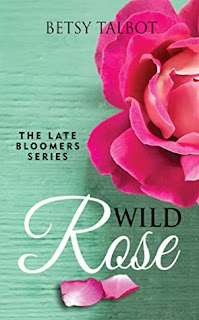 Fall in love with The LateBloomers, a series about five 40-something women who each choose adventure, travel, and love when they reach a crossroads in life. These seasoned women are ready to take on the world, starting with Book 1: Wild Rose.

About the Book:
Rose Quinn is having a very bad summer. First her 19-year-old daughter left home to backpack across Europe instead of going to college. Then a woman she loved like a mother died of a heart attack, making her feel like an orphan all over again. And in just a few weeks her best friend will be moving to New York City. For a single mother who’s always had someone else to take care of, Rose is finally wondering how to take care of herself.

Handsome Mateo Romero is a transplanted Spaniard running a restaurant on Lake Como in Italy. A broken heart got him there, but he’s made a success of it just like he did his architecture business back in Madrid. One thing he hasn’t been successful with is love.

When Mateo hires Rose’s daughter for a summer job and gives her a free place to stay, Rose immediately suspects the worst. She won’t let her daughter make the same mistake she did at that age, so Rose flies to Italy to confront Mateo. What Rose finds instead is a secret she didn’t suspect and a challenge to everything she’s ever thought about love and the illusion of control.

Rose’s daughter doesn’t need saving, but can Rose save herself?

A few thoughts:
Its a new series for Women over 40 but really.......under 40 will enjoy it as well :)
Introducing Rose who went to Italy to chase after her daughter whom she believes is having an affair with a much older guy.  This is a refreshing story about friendships, letting go and finding love again.  Its the perfect summer read. 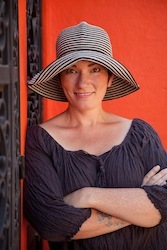 Since I first learned to read, I've devoured at least one book a week (currently, about three). As curious as I am about what other people write, I'm just as curious to talk about it in real life, especially if we can do it over a great meal.

After coauthoring four nonfiction books with my husband, I'm now writing a romance series for wSince I first learned to read, I've devoured at least one book a week (currently, about three). As curious as I am about what other people write, I'm just as curious to talk about it in real life, especially if we can do it over a great meal.

After coauthoring four nonfiction books with my husband, I'm now writing a romance series for women over 40 called The Late Bloomers. Adventure, love, and self-discovery await these experienced and confident women!

A Shameful Consequence by Carol Marinelli. 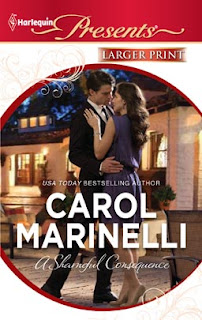 Back of the Book

Nico Eliades is back on the idyllic Greek island of Xanos to uncover long-buried family secrets. He can't help but notice a bride in a crumpled wedding dress sitting on the steps of his hotel.

Constantine's orchestrated marriage is over before the wedding night. A humiliated virgin bride, she longs to feel desired, and at Nico's skilled hands she experiences white-hot passion.

But their one night brings more than just shame on Constantine and her family…. Constantine has no choice but to reveal her bombshell to Nico—yet still her fingers tremble as she dials the number for Eliades Enterprises….

Wow, what can I say about Nico that will sum him up in a tidy package.....ARROGANT PIG?  Not exactly. I found him to be very cold by not acknowledging his child til the end.  That did not sit will with me. Also, I was hoping there would be more of a "showdown" between Nico and his adoptive parents but that didn't happen.

Constantine on the other hand, started out as a beautiful creature but ended up as an overweight, single mother.  I wanted to see a bit more fire from her.  Instead of relaxing at Nico's house, I was hoping she would leave with the baby to force Nico to acknowledge the baby's existense.

Overall a good plot but I was disappointed as the final story.......it felt rushed! I'm giving this 2 stars but will read the next in the series.
Posted by Islandgirl Evy at 4:18 PM 10 comments:

Labels: Author with last name starting with M: Harlequin/Silhouette Reading Challenge
I am jumping for joy!  Look what came in the mail compliments of
Kaitlyn McCrystal over at Touchstone Publicity: 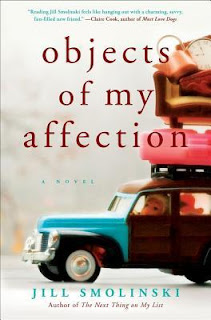 
Lucy Bloom’s life is in disarray. Freshly dumped by her boyfriend and suddenly rootless after selling her house to send her teenage son to rehab, she is reduced to sharing a bedroom with her best friend’s pre-schooler daughter. Although Lucy has lost it all, she’s determined to start over and build a solid foundation for her son’s recovery. Armed only with her decidedly NON-bestselling book, Things Are Not People, and a possibly bogus online degree in professional organizing, she snags a high-paying job clearing clutter from the home of renowned artist turned reclusive hoarder, Marva Meier Rios.


As Lucy rolls up her sleeves to tackle the “stuff” that fills every room of Marva’s huge Chicago home, she soon learns that the real challenge may be taking on Marva herself. However, when Lucy accidentally discovers that Marva is clinging to a big secret more tenaciously than to any mere household object, the two women form an unlikely bond. Each soon learns that there are those things in life we keep and those we need to let go—though it’s not always easy to know the difference.

Posted by Islandgirl Evy at 2:26 PM No comments: 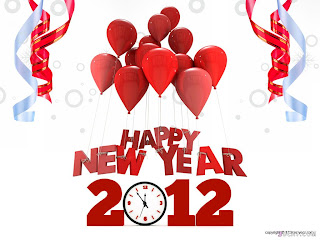 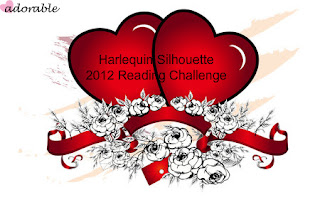 Its my favorite time of year when we tie up loose ends and plan for a new beginning and with that comes a new Reading Challenge.  Its the Harlequin Silhouette 2012 Reading Challenge and the very first challenge I will host.  Here's the info:

Rules:1 This Challenge is from Jan 1, 2012 to Dec 31, 2012.
2) All of the books must be from the Harlequin family of imprints (includes Mira books as well)
3) Read one book for each of the following requirements:

Other information:
1) Please join the challenge by signing up with Mr. Linky. The link must be the one announcing
your participation on your blog - not just the link to your blog in general.
2) You can grab the button above and post it on your site.
3) A list ahead of time is not necessary and may be changed at any time
4) Books can be in any format - paper, audio, ebook
5) Books may be used for other challenges
6) Go to eHarlequin for book information, anything you can purchase there counts for the challenge.

There will be a raffle and prize at the end of the year using the names of everyone who completed the challenge. Sign up for the challenge using the "tiny" Mr. Linky below. Your url must lead back to the post on your blog announcing your participation in the challenge.

Mia and the Powerful Greek by Michelle Reid

About the book:
While scrubbing floors, Mia dreams of a better life. Then she discovers she's a Balfour—the illegitimate daughter of one of the world's richest dynasties! Thrust headfirst into her new family's spectacularly glamorous lifestyle, she's scared….

But then comes an opportunity to learn about high society, through the chance to work for Greek tycoon Nikos Theakis, who struggled his way up, himself, from the slums of Athens to Millionaire's Row. Nikos has got where he is by always having taken what he wanted…. Until Mia's sweetness and integrity stop him in his tracks…

My humble opinion:
Loved it. The first in a 8-book series about the Balfour Sisters.
The Hero is a brute and tries not to get involved with the Heroine but her beauty and innocence is hard to resist, especially since she is forced to work with him. This makes a great summer read....not too heavy.
Posted by Islandgirl Evy at 8:49 PM 2 comments: 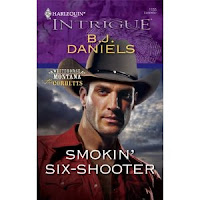 Come check out my other book blog

Followers of this blog 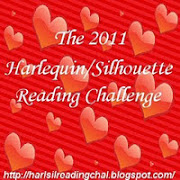 Books I read for the Harlequi/Silhouette Challenge 2011 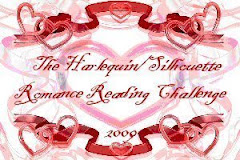 Books I have read for this Challenge